Nottingham Forestit is Much-maligned £150million recruitment campaign made Alan Rogers think about what might have been.

In 1998, the defender was part of Forest’s previous squad to be promoted to the premier league. The team included Pierre van Hooijdonk, Kevin Campbell and Colin Cooper. They rampaged for the title under Dave ‘Harry’ Bassett and had ambitions to once again establish themselves as a top-flight force.

But instead of getting stronger, Forest’s summer was remarkable for a variety of reasons. They somehow managed to head into the new campaign in a weaker position, with Cooper sold to the old club Middlesbrough and Campbell – who had scored 23 goals during their promotion campaign – bizarrely sold to Trabzonspor. All of this prompted their other star striker – Van Hooijdonk, 29 goals – to go on strike, in an ill-conceived form of protest.

Forest fell back into the second tier and Bassett was sacked and replaced, briefly, by Ron Atkinson, a man who couldn’t find the home dugout, let alone a convincing plan to escape relegation.

Getting back to square one doesn’t quite cover it, with 23 long years passing before Steve Cooper arrived to finally bring Forest back to the top flight.

“I didn’t think it would be this long before Forest returned to the Premier League,” said Rogers Athleticism. “If we had added one or two quality players, we might have been an established Premier League side for years. But when an owner does not support the manager, there will only be one outcome.

“I like what Forest have done this time around. They had to sign a lot of players because a lot of players left. You can’t blame them for not starting well. When we got promoted, there wasn’t a huge difference between the bottom eight teams in the Premier League and the top six in the Championship, which is why if we had kept this team together we would have been fine.

“Forest has raised and spent £150m ($177m) – and the gap they are trying to close is huge. Even after all that spending, do Forest have one of the most valuable squads? No. They just gave themselves a chance to compete.

Forest have made 22 additions, breaking their transfer record twice, first with the signing of Taiwo Awoniyi from Union Berlin for £17.5m, then when Morgan Gibbs-White has joined Wolves in a £25m deal.

In the summer of 1998 Forest spent £900,000 on Dougie Freedman and £1.5million on Neil Shipperley to bolster their attacking options.

“Did I understand why Pierre went on strike? No. We were paid to do a job, and more than that, we owed the fans to give our best,” says Rogers.

“I had a lot of time for Dougie and Neil. No disrespect, but it wasn’t Pierre and Kev. “Harry” should never have been fired. He got kicked out of key players and then was given the impossible task of keeping us in shape. He had no budget. We signed players like Glyn Hodges. He was a great guy, but he was also around 35. You show your ambition there, don’t you?

A year before, Forest wisely invested £2million to sign Rogers, a young, rampaging full-back from Tranmere Rovers, but that move nearly ended before it started.

“I was vacationing with my girlfriend – now my wife – in Cancun. Back then, nobody really had a cell phone. We were in the hotel room, getting ready to go out,” Rogers says “The phone rang and it was someone saying, ‘It’s so-and-so from Nottingham Forest.’ I hung up the phone and told them where to go. I was convinced it was someone peeing. I thought it was one of my friends who was bothering me.

“They had to call a couple of times, line up well and say, ‘No, this is really, really Nottingham Forest, we want to sign you’. I was thinking, ‘Holy shit, I almost screwed that one up before even though we started.’ Once we started talking seriously, Stuart Pearce was one of my idols, so that was the only place I was going to go.

Rogers went on to make 152 starts and three substitute appearances, scoring 20 goals in four years at Forest. But life at the club didn’t start out quite smoothly due to Rogers’ mischievous sense of humor – and not much common sense. This led to him missing his first weeks salary at his new club due to fines.

“I was always a bit of a prankster, I still am. I never grew up,” Rogers says. “In my first pre-season with Forest, we had to take about three different flights back from Finland. The last was from Amsterdam to the East Midlands.

“I don’t know to this day why I thought it would be a good idea, but I was waiting to go to the bathroom on the plane and saw the stewardess make an announcement. I decided that It would be fun to hit the ‘bing-bong’ button and announce, ‘Brace, brace, we’re going down, the plane is going to crash’.

“I saw a bit of banter there, without realizing its seriousness. You don’t think about the potential fallout when you’re that age. It wasn’t the best start to my Forest career, it annoyed some important people. But it helped me a lot with the guys.

Rogers was quick to win over fans, who had a historic appreciation for left-backs armed with attacking ambition. Rogers started all but one game during Forest’s promotion season and remained a key figure in the top flight when he was voted Player of the Season. Following relegation, he scored 11 goals in 1999-2000. But disaster struck in November 2000, when Rogers ruptured his ACL.

“When I got that injury, what followed was partly my fault,” he says. “I was one of the main players then. We tried to rush me. I just wanted to play and started my own career, really. I tried to come back too soon.

“I kept falling apart. But then it got to the point where it wasn’t my fitness that was the problem, it was the fact that I was being paid well. The club was struggling I offered to take a pay cut or spread the money over a longer contract.

“But that didn’t materialize and Dave Bassett wanted me at Leicester, where he was now manager.”

Rogers joined Leicester city for £300,000 in November 2001. It’s unfortunate that when Rogers first returned to the City Ground it coincided with a promotional event for Boost chocolate bars – with predictable results. When he went for a corner, Rogers found himself sheltered by a shower of sweets.

“There were quite a few candy bars that day,” says Rogers, who took a bite of a bar. “People didn’t understand why I had moved. We had just had our first baby. I didn’t want to move. We previously refused a move to West Brom for similar reasons.

“I have nothing against Leicester, they are a great club, but the main reason I went there was that it was just a short drive on the A46. Forest wanted me to go out off their books for financial reasons. Forest fans didn’t like me because I went to their rivals. But it wasn’t the same for me there. 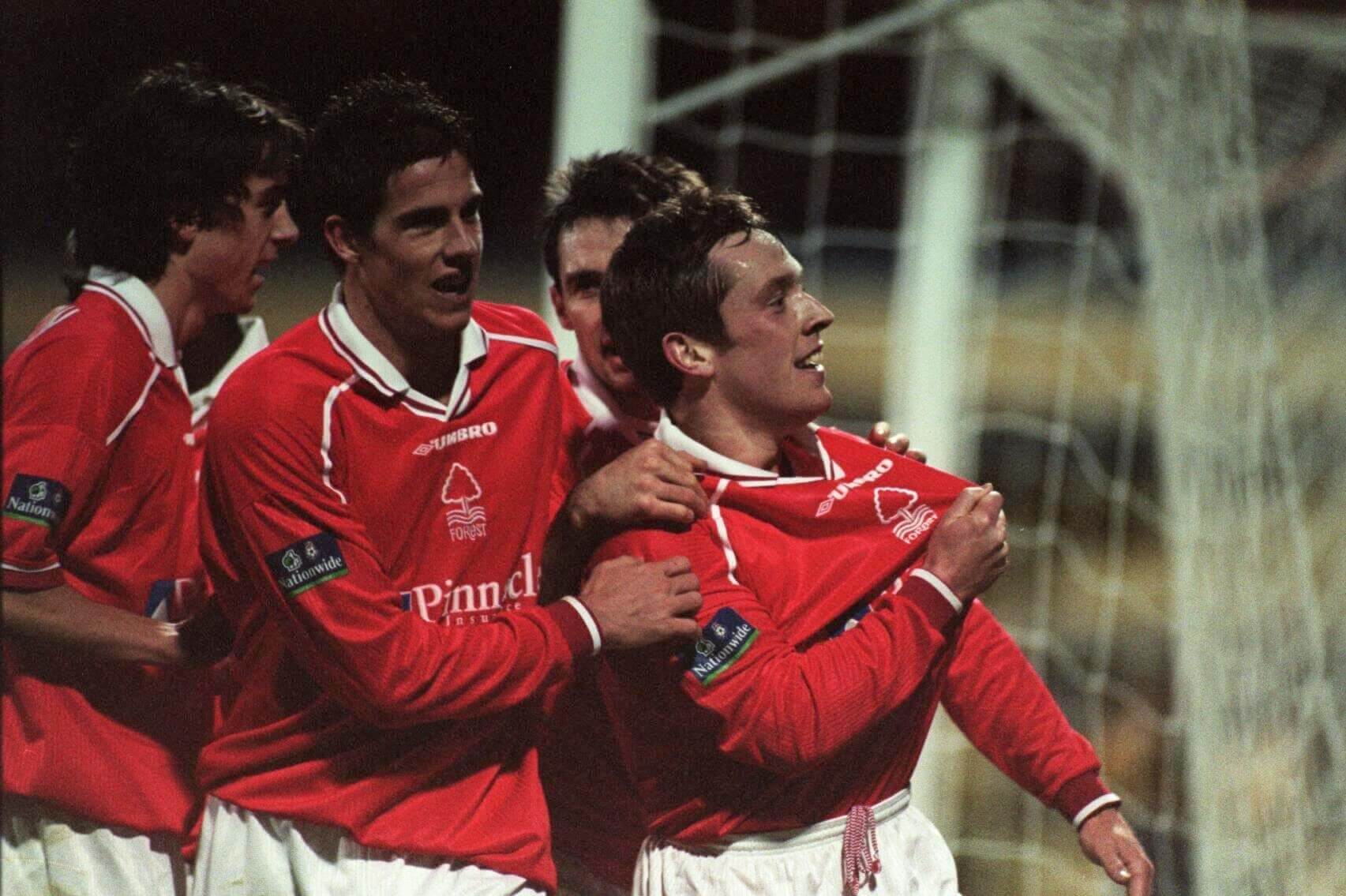 Rogers jumped at the chance to return to Forest, initially on loan, in February 2004. But when manager Joe Kinnear left in December 2004, after Rogers’ move was made permanent, he was replaced by Gary Megson.

“It was a car accident waiting for me,” says Rogers. “I had refused to move to West Brom when he was manager there. The first thing he said to me was that it was going to be the end of my career at Forest.

“Marlon King, David Johnson, Paul Evans… we were all shipped away from the first team. The club were redeveloping the academy at the time and we were made to change in a room made out of a shipping container.

“It happened at a stadium where I wasn’t even allowed to park on the pitch on a matchday. Such (Terry Farndale) the kit man – he was part of the heartbeat of the club, c He was a legend, everyone loved him – he must have told me I couldn’t park when I arrived. I idolized Tel. He was an amazing guy. But the manager had told everyone world that if I showed up, I had to be fired.

“It was ridiculous, considering what I had done for the club. Megson – he didn’t do me any favours. I don’t think he did himself a lot of favors either.

Rogers, unsurprisingly, is a much bigger fan of the current forest manager.

“What I like about Cooper is that he wanted to adapt to Forest because they were too open. He made them compact and hard to beat. He deserves to have a full season in the Premier League and another year more, come what may. He took Forest from bottom of the Championship to promotion. Surely he has a lot of credit in the bank.

After Rogers left Forest for the second time, initially joining City of Hull on loan before moving to Bradford City in the summer of 2006, he, like many Forest players, kept in touch with Farndale, who was also a cult figure with fans, due to his habit of wearing only shorts and a t-shirt, even on the coldest days of winter.

“I went back several times to see him. Jack, my son, would like to see Tel when he was a child. He always had candy,” Rogers says. This young man, Jack, is now on his own path in football, having signed a two-year contract with Burnleyis under 18 years old.

Rogers had a brief stint as an academy coach at Burnley, having served in a number of roles, including caretaker manager, during a two-year stint at Tranmere. But he has no plans to return to football, preferring to focus on the racehorses he has an interest in and his son.

“I missed a lot of Jack’s football when he was younger because I was still working in the game, so I don’t want to do that anymore. I want to see him play,” Rogers says. “He’s just starting to find his feet “He has a chance. I’m just going to watch. His coaches are training him. If he wants my opinion, I’ll tell him, but I don’t want to put any extra pressure on him, because there’s enough pressure on the youngsters. Nowadays.

“He’s a super talented lad. He’s a central midfielder. He’s totally different to me. He’s a good, cultured player – he’s not a throwing and running dealer. Although I guess I don’t I didn’t do too badly with that.